Joseph Pilates identified that we spend a lot of time sitting and immobile, with sedentary jobs. This he suggested led to bad posture, which can result in issues within our bodies, including Low back Pain. And to be sure a large number of issues, including low back pain can very well be caused by our seated posture. Whilst seated obviously the hips are flexed, the hip angle reduced. The muscles that flex the hips are not working actively, they are sort of at rest, BUT in a shortened position. Remember that we are just animals, and for the brain to maintain a muscle in a lengthened state, requires more muscle tissues for this extra length. Muscle tissues is expensive energetically. So why would the brain waste this energy in having a muscle long, when it (we) spends almost all of its time in a shortened position. It doesn’t, that’s the point, it shortens the functional length of the muscles, by reducing the length. Now other factors can functionally shorten the hip flexor muscles as well. Increased ‘tone’, perhaps due to the dominant use of the hip flexor muscles. Remember when we use muscles more, there is greater need for the brain to keep those muscles continually and more regularly firing. Basically this is increased tone – tonus, which is just the muscle fibres taking turns to fire more often.

Also a muscle may go into spasm, which again shortens the muscle.

For every action there is an equal and opposite re-action. So although the ‘intention’ is to keep the spine still and the line of pull should result in the bending or flexing of the hip; Newton’s 3rd Law means that the opposite action is also capable of being brought about i.e the spine gets pulled down and forward. With this forward pull may be brought about an anterior pelvic tilt and resulting over arching of the lower back – lumbar lordosis.

We sit down with lets assume tight hip flexors, there is no effective pull in this position; the moment we start standing may result in extra pulling on the spine and rotation forward of the pelvis. This puts extra strain of the spine and associated muscles. This may than translate into low back pain, hamstring inflexibility etc. So as a general rule a lot of people fit into this category, that is we spend too much time hips flexed and or perform hip flexor dominant activities or sport. BUT, that does not translate into – Everybody has tight hip flexors, therefore everybody need to stretch them off or more correctly reduce their tone and or dominance. And that is where Pilates comes in! So many times people say they have tight hip flexors. Usually after visiting their Dr, physio or sports massage. Now this may very well be true, but have they been assessed for tight hip flexors? Or are well meaning people assuming one size fits all eg I had a bad back caused by tight hip flexors therefore your back is also due to overly tight hip flexors.

They then decide to prescribe themselves with hip flexor stretches to perform. Missing the point that, even if they have tight hip flexors, it is usually more about reducing their dominance and tone than lengthening and stretching per se. It is in people’s best interest to have their hip flexors assessed by a suitably training professional. I myself perform this within my Postural Assessment. The reason being is that one size does not fit all and your issues may be the result of other issues within your body, or indeed elsewhere within your body. It is possible that, due to sitting passively, their hip flexors are actually weak, and are being asked to perform their normal job, in this weakened state. They are not ‘up to the job’ and something has to take up the slack – noticeably other muscles or muscle groups.

The Psoas major originates (that’s the part that is ‘meant’ or ‘intended’ to be still and relatively immobile whilst the muscles pulls from this stable platform), and inserts on the lesser Trochanter (the inside of the upper thigh).   The tensor fasciae latae (TFL) originates or the ASIS of the iliac crest and inserts onto the IT band. The male hip anatomy differs from the female, men’s hip sockets tend to be further to the sides – this plays a part in why some men may have issues getting their knees together in the Pilates move – Rolling Like a Ball. A tightness in this muscle may refer down to the knee e.g. runners knee. 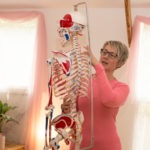 The rectus femoris (one of the four quad muscles) also inserts onto the pelvis, making it a hip flexor. As it technically crosses two joints it is referred to as a bi-articulating muscles (more on this in another blog, as these muscles can appear to do strange things).   The Sartorius, the longest muscle in the body can also be classed as a hip flexor, albeit a minor flexor. Issues in this muscle can be misdiagnosed as medial collateral ligament issues on the medial side of the knee. The action of this muscle can best be demonstrated if you imagine a person climbing a ladder with their knees out to the sides; or perhaps you have seen a pedal cyclist riding with their knees out to the sides. On that note it is common for cyclist who use cleats to have issues with hip flexors in general, as the action is very hip flexor dominant. 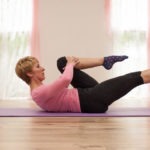 So whilst all these hip flexor muscles function slightly differently, they do all serve as hip flexors. There is an argument to suggest that the role of the psoas is as a lumbar stabilizer as it attaches to the vertebral bodies of the lumbar spine. The line of pull if standing upright is to compress downward the spine.

Evolution – On all Fours

Being pedantic I would suggest that, yes it does do that, but it would be more correct to suggest that this is not its ‘function’. This is merely the result of us insisting upon walking upright. Its correct function is to act as a powerful spring bringing the hind legs forward with power (remember we used to run around on all fours). Go and watch your dog run, powerful hip flexors, strong glutes thigh muscles to push the legs away behind it, working against the hip flexors. 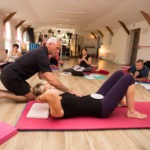 Remember that evolution does not create things from new, evolution tinkers with what it has. As we progressively started to walk more and more upright, this particular muscle acted more and more as an unintentional hip flexor. So conversely you could argue, that the issues that people get as a result of the psoas, are not due to sitting down, but perhaps, more correctly, as a result that we evolved to and insist upon walking upright.

So just what test do I perform at the conclusion of the postural assessment. Well a few including Trendelenburg and others. The one test / assessment that is relevant is the Thomas Test.

This simple test assesses the flexibility of the hip flexors collectively. It is a simple and quick test to perform. Now there are variations that can be done with this test, this is just one way:-

The knee does not lower down to parallel then the Psoas is indeed tight / restricted. If the leg rises up when knee is bent to 90’ then the offender is the rectus femoris. If the knee rolls out to the side then the offender is usually the TFL with perhaps some Sartorius involvement.   It is a quick assessment, that may greatly aid your client. It is however possible to pass this test with flying colours yet still have issues with the hip flexors. What may be going on there? Invariably they have general core weakness. Again the psoas, by design or ill luck, ‘does’ serve to help stabalise the spinal column. The brain needs the spine stable, so it increases the tone of the psoas muscle, using it much like the guide rope of a tent. It helps brace and keep the spine as stable as it cam given the weakness of the muscles that should be performing this role – the core!

The aim of Pilates in these cases is to first increase the core muscles, getting them not just stronger, but having control of them. Along with the core muscles the same applies to the glutes (actually it applies to the whole body, we function as a whole not individual parts), strengthen and control. This not only takes the load off of the pelvic floor muscles, but relevant here they can now do their job of maintaining a steady, stable spine! Secondly, Pilates helps to reduce the dominance and tone of the psoas muscle. Now this is not necessarily done by performing tons of stretching, Pilates is not about that. It is about lengthening the body, thereby reducing the tone of tight or over toned muscles.

Spine curls, work very well at addressing most hip flexor issues, as well as working the posterior chain; which again aid in relieving the load on the pelvic floor. 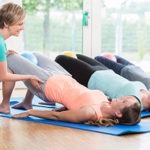 Knee Folds – simple and straight forward. Especially beneficial if performed as Joseph Pilates liked , with a flat back.

One can regress it to even simpler but effective moves such as, posterior pelvic lifts or just good old posterior pelvic tilts. It is the activation and release combined, with control of these hip flexor muscles, that make these movements work in releasing and letting go of tight hip flexors.

Do I Need a Special Class?

You can go to specialized physio, clinical Pilates classes, but frankly any reasonable Pilates Teacher ( a good one that is) session will do the trick just fine.  Pilates is so effective in so many issues. I haven’t even mentioned the connection between psoas and emotional release – that’s perhaps for another blog.     Much Love from Devon Paul & Tanja x
Elite Pilates & Yoga Services (Teacher Training)
Elite Pilates & Yoga Services (Teacher Training)
St Marychurch Road, (next to Plant World)
Newton Abbot
TQ12 4SE
http://www.youtube.com/c/ElitePilatesYogaServicesTeacherTraining
http://www.elitepilatesservices.co.uk/
https://www.elitepilatesteachertraining.co.uk/
Facebook
Youtube

Exercises for Back Pain Using the McKenzie and Williams Method. Watch these low back exercises on how to fix Low back pain.

These orthopedic (chiropractic / physiotherapy) moves may be familiar if you have done Pilates or yoga before. Terrific for spinal mobility, treating and preventing sciatica, etc

This low lunge is a hip flexor psoas major stretch and general hip opener, chiropractor recommends similar exercises to open up the hips to ease low back pain, sciatica symptoms.